After hearing about the arcade phenomenon years ago, and seeing it revealed at Nintendo’s E3 2018 Direct, Killer Queen Black occupied a plot in my cerebral as I waited patiently for a release date. Fast forward to PAX East 2019, I was finally able to get some hands on time with the cult competitive platformer and it did not disappoint. After multiple visits back to the Microsoft booth to lose to the developers, my expectations were surpassed and my need for Killer Queen Black reached a fever pitch. Killer Queen Black delivers an addictive loop of competitive strategizing that doesn’t stumble.

At its core, Killer Queen Black is a high-speed, action-platformer consisting of two teams of four fighting for victory in a best of five set. Each match can be won in three different ways– economic, military, or snail. Every round, each victory path is available at all times for both teams. The teams are comprised of one queen and three workers, where each has a distinct role while vying for victory.

Queens are equipped with a sword and wings from the start and are tasked with staying alive while the workers are able to perform a multitude of functions to help achieve one of the three victory conditions. Workers can evolve to gain skills such as speed or shield, or choose to upgrade to a sword, morning star, or stinger wielding warrior.

Now I’m explaining the win mechanics in as basic of terms as possible, but for those who aren’t familiar with Killer Queen or need a refresher, they can dive into the tutorial trials that concisely break down the mechanics of the game and how the win conditions function. The tutorials are quick and easily explain all aspects of the game. I would highly recommend completing the tutorials before playing online if you are new to Killer Queen Black.

Killer Queen Black offers local and online play with Quick Play, Ranked, and Custom Matches being available to you from the start. Local multiplayer is an option, but in order to play an eight player match locally, two Switch’s and two copies of Killer Queen Black are needed. However, one to four players can group up on one Switch and take the fight online with no qualms. Granted we have only been able to play on the servers with other reviewers and developers, the matchmaking was snappy and revealed very little issues playing with a mix of Steam and Switch players cross-platform.  One very vital tidbit worth mentioning about Killer Queen Black on the Switch is that it has native voice chat enabled! This allows you to plug in headphones with a microphone and chat with other players. In a game that is focused around competitive play communication is vital and the fact that the Switch version has this without the need to use something like Discord or the Nintendo mobile app is extraordinary. This may seem like a silly thing to draw focus too but if you are not familiar, most games on the Switch do not have native voice chat as an option unfortunately. 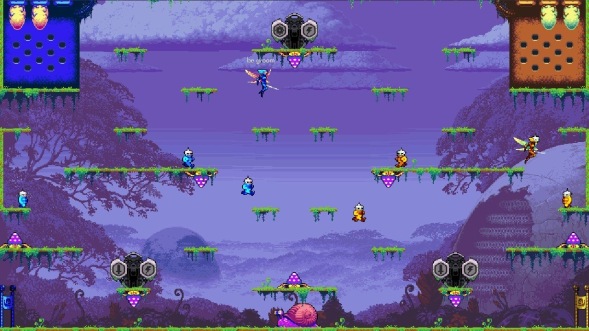 Fast moving matches, Killer Queen Black delivers a satisfying gameplay loop that will keep you begging your friends for one more match. More often than not, rounds can be decided by jaw-dropping, stop you in your tracks moments. Whether it’s a swift queen kill or a worker sneakily moving the snail across the finish line, being aware of all three win conditions at all times as well as the enemy team’s current motives are integral to succeeding and are soaked in intensity and bug guts.

The retro aesthetic is pixel-perfect, and when you’re tossing berries or attacking your foes it always felt like the animations were true to what was happening on screen. Gorgeous pixel art and an enthralling soundtrack heightened our experience with the game. The use of sound effects and music to denote priorities or changes in the flow of the match add to the tension on the battlefield and can help you quickly identify that there is something worth your focus if you are currently focusing on the wrong aspect of the match.

Gameplay-wise, it’s hard for me to find any complaints about Killer Queen Black. For a game that’s has a competitive fanbase, it’s important that the game feels balanced and the controls and mechanics are tight. Killer Queen Black serves up a chef’s kiss worthy experience. There’s an argument to be made that not having the ability to play eight players locally is not ideal, but Liquid Bit and Bumble Bear have their reasonings for keeping that from being an option whether you agree with the decision or not.

Killer Queen Black has a low barrier to entry and is easy to learn and start playing but the skill ceiling appears almost infinite with how the gameplay and meta seemingly change on the fly each round. With victory conditions revolving around three different but always accessible means, the constant seesaw during matches offers up a delicious concoction of strategy, defense, and offense that’ll quench the thirst of casual and competitive players alike. I highly recommend seeking out Killer Queen Black as your next party game with friends or something to dive into and climb the competitive ranks. With a burgeoning competitive scene and the promise of future support and updates to Killer Queen Black this will be a staple at many gatherings around the globe.

For all things Killer Queen Black and indie game related be sure to keep it locked to Pass The Controller. For a deeper dive on all things gaming and nerd culture, listen to the Pass The Controller Podcast with new episodes weekly on your favorite podcast platform. Want to continue the conversation with us and our community? Join our official Discord server.