Though, most notably known for their work with the Pokemon franchise, developer Game Freak has made other games outside of the collectible monster battling genre– not always RPGs either. So when Little Town Hero was announced to be a different style of RPG from the makers of one of the most beloved RPGs of all time, I was elated. Although, whether or not Little Town Hero stands apart as a worthwhile adventure, may vary from player to player.

The overall narrative of Little Town Hero is rather simple– Axe and his group of friends desperately want to defy the laws of the castle that governs them and leave their small village to venture the world around them. With that, the game takes place almost entirely in the confined space of Axe’s village. Later on, there are some interesting story beats that present themself, but for the most part the first three quarters of the narrative offer little outside of the overall premise. 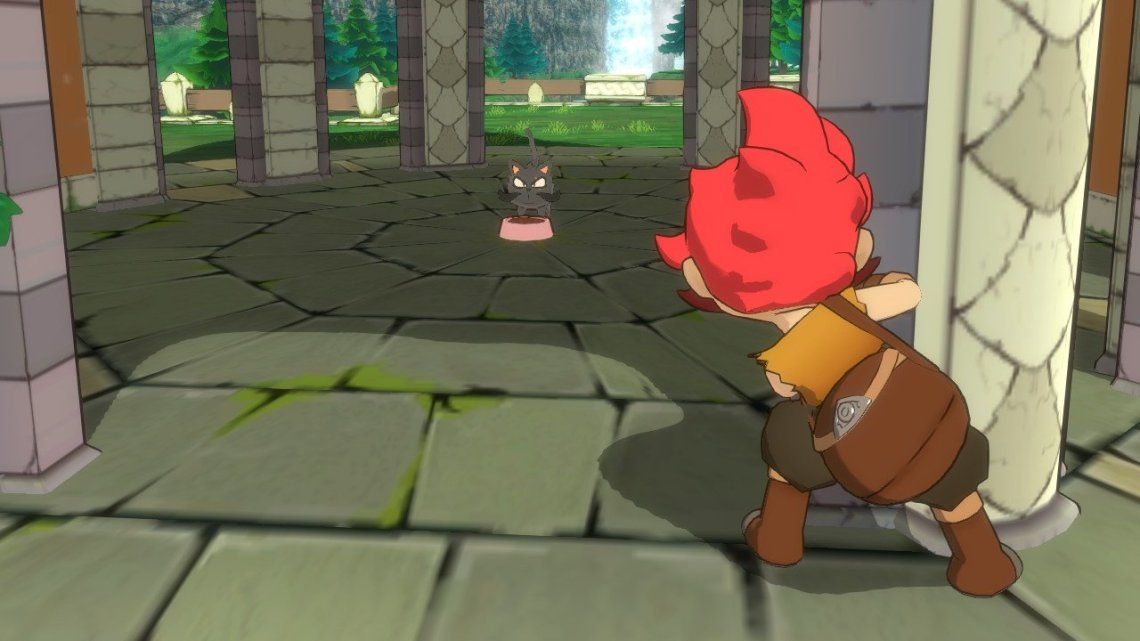 What really separates Little Town Hero from similar games in the genre is its battling system. For the sake of my review I’ll explain the mechanics as brief and as detailed as I can so my critiques may make the most sense possible. The battling system revolves around managing your selection of “Izzits” and “Dazzits” as well as your space on the battlefield which resembles a board game. Each turn you are allowed to turn your “Izzits” into “Dazzits” by using the remaining power you have per turn. “Izzits” come in three colors: blue, red, and yellow. Blue “Izzits” usually deal status effects or other non-attack functions while red and yellow “Izzits” are used for attacking. The main differences between the red and yellow “Izzits” is that the red can directly attack the enemy on a “chance turn” but can only be used once per turn, while yellow “Izzits” can be used until they are broken.

Defeating an enemy isn’t as simple as attacking with your “Dazzits” though. Similar to other card-based games, each “Dazzit” has an attack and defense number assigned to them that will determine which “Dazzit” will remain intact when you engage with the enemy. In order to achieve victory, you’ll need to clear out the enemies “Dazzits” in a turn and then attack the opponent directly by first depleting their “Guts” level and then attacking their “Hearts” directly. Each time you take away one of the three “Hearts” from your enemy their “Guts” meter is restored and you must break it again.

Aside from managing your “Izzits” and “Dazzits” you will also be moving around a board game-like battlefield in-between turns. Your moves are determined by stopping a block that cycles through one to four spaces. Managing this aspect of battles is crucial as some spaces will have allies that can aid you or other special weapons that can give you an advantage in battle. Aside from the roll in-between turns, there are certain “Dazzits” that will give you the ability to move freely on the next turn within four spaces. Part of the the strategy involved in Little Town Hero is utilizing those specific “Dazzits” whenever possible. 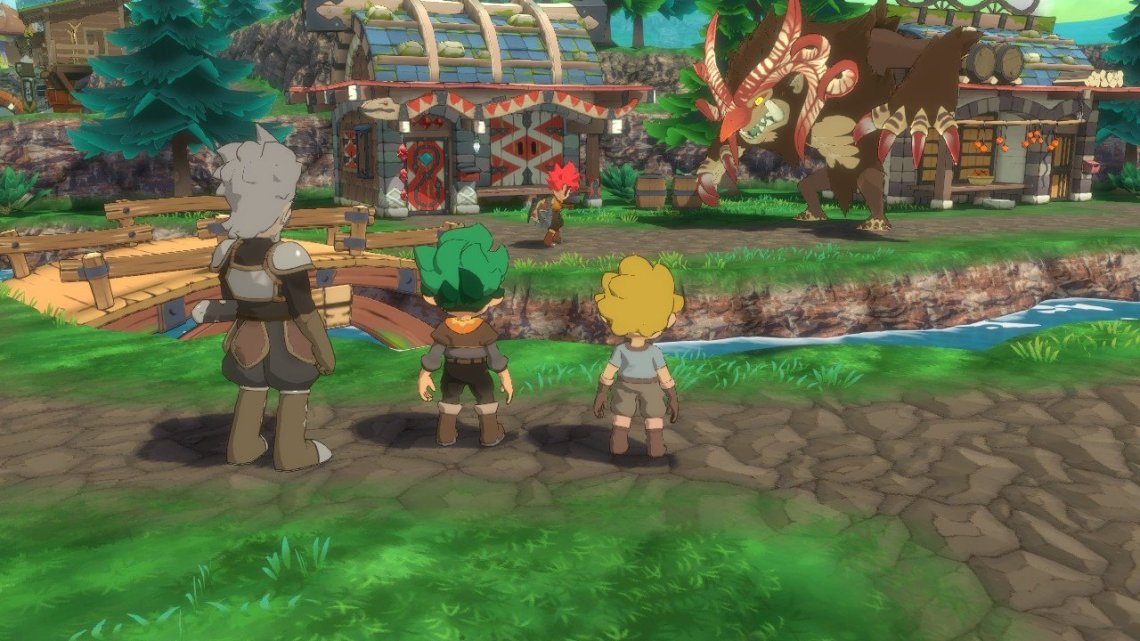 Hopefully this gives you a basic understanding of how the battle mechanics function, the game does a fine job of teaching you the battle process and many of the early fights hold your hand to ensure you make the correct choices and understand the flow of battle. If the fighting doesn’t sound like something you may enjoy, then I don’t think this is a game for you. Most of the game focuses around battling, and fights can range anywhere from fifteen minutes to hour long chess matches. Which, if this fighting system seems like your cup of tea, you may be all in. For me, it never really clicked.

Unfortunately, the pacing of battles was frustratingly slow. The same enemy animation at the start of each turn, no ability to skip through certain parts of fights or attacks, and the slow build up of power and “Izzits” felt less like strategy and more like a monotonous trudge through the same cycle of inputs just to peck at the enemies’ “guts” and “heart” meters until the match ended.

Strategy is a necessity to win especially in the bigger fights towards the end, but it almost felt like in some fights all of my planning and strategy would get completely uprooted if my rolls on the board game aspect didn’t fall my way. Both the “Izzits” you pull from you headspace and the rolls bring in two separate random factors that can force losses or a chain of events that will result in going through lengthy retreads to get back any advantage you may have had. Especially since my fights probably averaged around thirty minutes, having to completely start over because of bad rolls or poor “Izzit” pulls negated any feeling of accomplishment when I did emerge victorious and instead resulted in a sigh of relief that the battle was over.

Aside from the battling, the rest of the gameplay doesn’t really ever deliver much outside of pushing the narrative along. Quests typically consist of walking from one part of the small town to another part of the small town and triggering a battle. There are side quests to undertake, but those were the same amount of walk and talk that the main missions offered. So for someone who wasn’t enraptured by the fighting, I felt less motivated to press on with the turn of each chapter. Plus, no one wants to fight you Matock.

Ultimately, I think there is something really interesting here with the battle system, but unless you absolutely love the mechanics, I think the margin for enjoyment outside of that is rather thin. The delightful music and charming character design aren’t enough to warrant a playthrough. Sadly, Little Town Hero is an ambitious bite sized adventure that feels incomplete and unrefined. I would love to see Game Freak revisit this world again and build upon the fighting system, but with no shortage of great RPGs available on the Switch and Pokemon Sword/Shield arriving a month after Little Town Hero, you may want to look elsewhere for your JRPG fix. 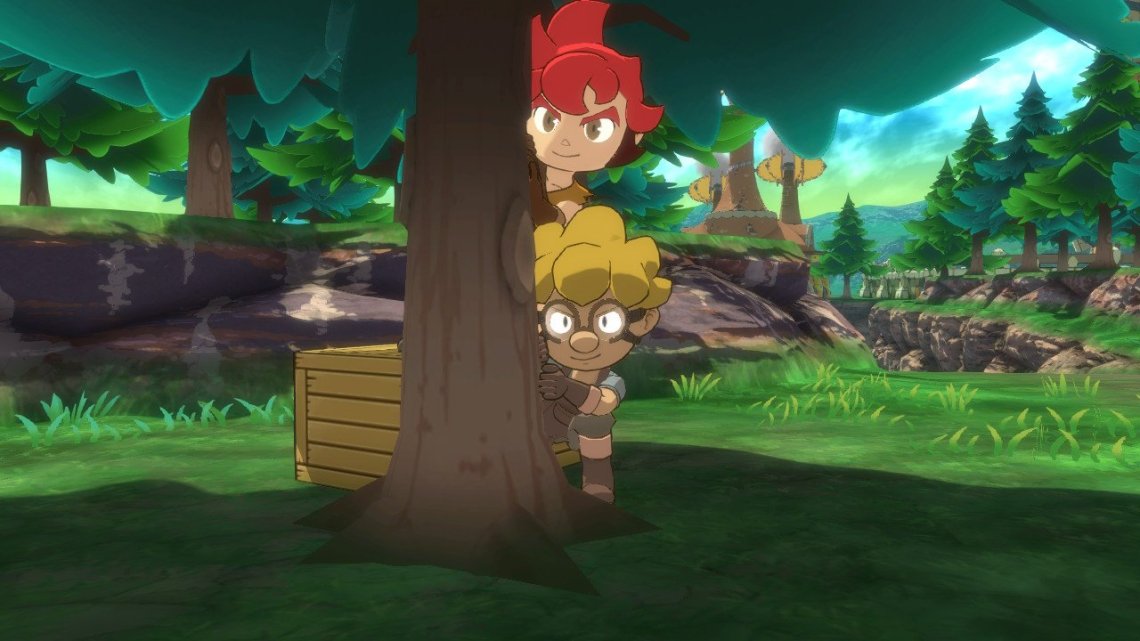 Little Town Hero releases exclusively on the Nintendo Switch on October 16th for $24.99. Game was reviewed by a code provided by the developers.

For all things Little Town Hero and indie game related be sure to keep it locked to Pass The Controller. For a deeper dive on all things gaming and nerd culture, listen to the Pass The Controller Podcast with new episodes weekly on your favorite podcast platform. Want to continue the conversation with us and our community? Join our official Discord server.