One of my favorite moments earlier this year was at the Simogo corner of the Annapurna Interactive booth. When I passed by the bright flashy neon screen, the pop jams swirled through the crowded PAX East floor and into my body. I was caught in a wave I couldn’t escape, Sayonara Wild Hearts stole my beating heart in March and I’ve been longing for its groove to hit me again ever since. With an art direction that compliments its undeniably catchy original pop tunes and accessible arcade gameplay, Sayonara Wild Hearts is an arcana filled, heartbreaking journey that resonated with me on depths I didn’t expect.

Sayonara Wild Hearts opens up with the narrator quickly explaining how the protagonist is suffering from a broken heart, and before you know it you’re transported to an alternate universe. Throughout the twenty-three tracks of the game, or playable pop album, both the narrator and the lyrics to the songs help escort you on the journey of the protagonist’s alternate ego, The Fool, on a road towards new beginnings. After completing the game I realized that the narrative can be interpreted in a few different ways. An allegory for relationships or one of self discovery through overcoming despair or hopelessness. Though, Sayonara Wild Hearts doesn’t explicitly say all of that, but I found room for self reflection in a game that honestly can be enjoyed whether you derive any emotional connection or gain from the narrative at all. Drawing these connections for me, when the final stage crescendos, I felt a swelling up in my eyes as well as my heart.

Narrative aside, the best features of Sayonara Wild Hearts can be attributed to its art direction and sound design. An eye catching color palette and synth-pop melodies felt like cotton candy was being shoved in my eyes and ears and my hunger pangs wouldn’t relent. With hints of Sailor Moon, each string of heartbreaks felt like an arc of an anime with how each section you encountered new game elements, enemies, and their own sense of identity. Sayonara Wild Hearts emits an aura of style that lets me feel way cooler than I actually am or could ever hope to be. The aesthetic even flourishes within the minute details of the snappy menu and presentation of level selection, which made everything cohesive. I feel as though these design choices kept the immersion persistent throughout my time with the game. It truly felt that when you start playing Sayonara Wild Hearts you are pressing play on an album and everything until the moment you turn it off is encapsulated as the Sayonara Wild Hearts experience. The visual and aural pleasure across the game also lend to its replayability and desire to revisit some of your favorite tracks.

From a gameplay point of view, Sayonara Wild Hearts is very approachable to players of all skill levels. Depending on the track, you are usually navigating the space on a vehicle of some sort– save for some moments of battle, and a few other surprises– but the game is almost entirely on rails, which lends itself to the rhythm nature that resides within. Your goal is to move throughout the levels acquiring hearts to increase your score, sometimes there will be button press prompts to coincide with the music and the visuals. Throughout the game, you will encounter certain new mechanics that add more variety to the level design and at first may catch you off guard but you quickly learn and adapt to these new mechanics. The quick introduction of these mechanics throughout the arcs always felt as though they flowed nicely into the gameplay.

Though I never thought the game was too challenging to complete from start to finish, the difficulty can be tweaked in a few ways to amplify your personal preference depending on the experience you’re trying to have. If you fail a segment of a level a few times in a row the narrator will prompt you with the options to skip the segment, keep playing the segment, or stop asking altogether. This little addition of flexibility allows for players who just want to enjoy Sayonara Wild Hearts through to the end, the ability to do just that. On the flip side, players looking to ramp up the difficulty can do so by chasing higher scores and achieving a gold rank on each stage– which is not easy by any means. Achieving gold rank definitely revolves around playing well and learning the layouts of the stages more closely. I felt this balance of difficulty worked well to appeal to all types of gamers and in era where the conversation of game difficulty seems to be a hot topic of discourse, Sayonara Wild Hearts handles it in the best way possible. 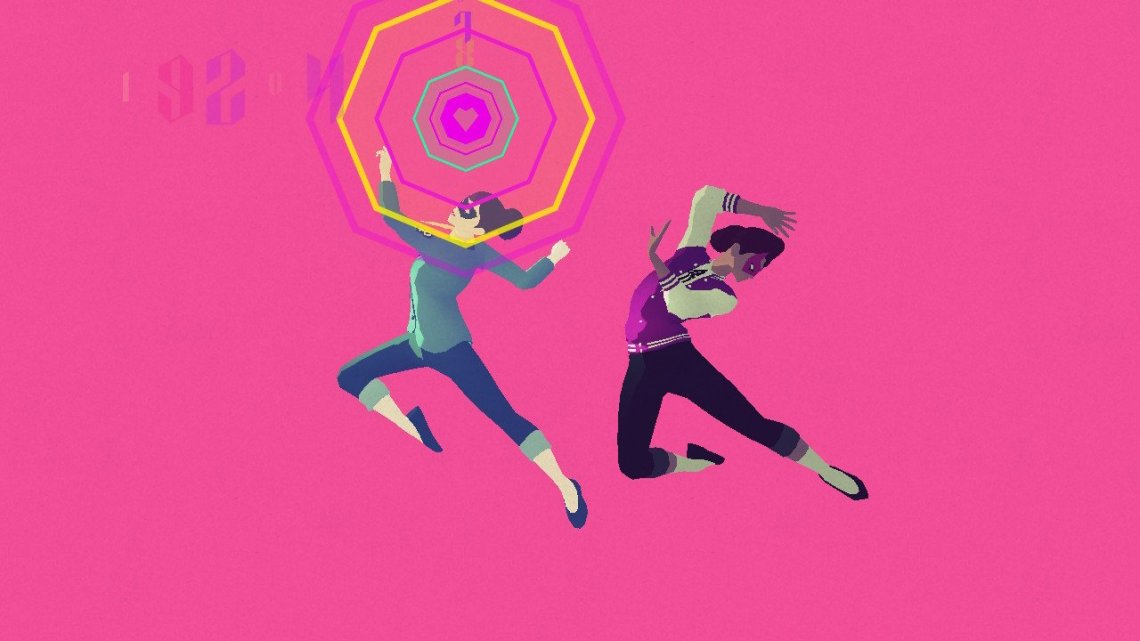 A game with this many highs has got to have some lows, and though overall I think Sayonara Wild Hearts is a phenomenal game it is a short experience. Which isn’t the worst thing, but it did leave me salivating for more in this world. The argument of replayability can be used here since there is the option to focus on high scores and achieving a gold rank but ultimately you can finish the game in one to two hours which can be a deterrent for some players. There’s also a slight difficulty spike on some of the tracks, but with the option to skip built in it’s hard for this to really be a complaint with a solid foundation for argument.

Quite possibly the best on-rails game that I’ve ever played, Sayonara Wild Hearts finds a good balance of challenge while delivering addictive and satisfying gameplay for gamers and groovers of all skill levels. The original pop album that accompanies the game is just as good to playthrough as it is to listen to, especially seeing as how I’ve had it on repeat in my car for the last few days. Although the experience is short, there is something special to enjoy with Sayonara Wild Hearts and I highly recommend you seek out this pop album disguised as a video game. It filled me with overwhelming joy and real world encouragement to begin again no matter how perilous an event in my life may seem. Easily one of my favorite games of 2019 and a video game that will be on my mind for the foreseeable future.

For all things Sayonara Wild Hearts and indie game related be sure to keep it locked to Pass The Controller. For a deeper dive on all things gaming and nerd culture, listen to the Pass The Controller Podcast with new episodes weekly on your favorite podcast platform. Want to continue the conversation with us and our community? Join our official Discord server.