Something beckons in the depths, a voice, a creature– wait no that’s just my subconscious begging me to play more Creature In The Well. Upon seeing it revealed in a Nintendo Direct earlier this year and having a chance to go hands on with it at PAX East 2019, Creature In The Well remained on my radar as September grew closer and my backlog grew larger. Creature In The Well takes the top-down, puzzle filled dungeon genre and injects it with elements of pinball and Breakout resulting in an adventure that’s sure to win you over at first slash.

Shrouded in mystery– and sand– you take the role of the last remaining BOT-C unit on a quest to restore power to an ancient facility in order to help the inhabitants of the mountainside village as well as recover knowledge about yourself. On your travels you’ll come across new weapons and augments to your core allowing you to upgrade your stats or add another layer of depth to your attacks. You’ll take these through eight dungeons and a final boss fight that will test all you’ve learned.

Though Creature In The Well isn’t heavily narrative focused, there is an overarching story and entertaining dialogue that accompany you on your journey from characters like Roger T. Frog and Danielle. There are also auxiliary nuggets of lore at the end of each dungeon that are completely optional to ingest and I adore when video games allow for this flexibility as long as they are balanced properly. The main narrative is present enough so reading through the terminals didn’t feel like a mandatory task to complete in order to enjoy the full scope of what Creature In The Well has to offer. While those looking to know a tad bit more, Phillip Frog’s logs on the terminals at the end of each dungeon expound on the facility, previous BOT-C units, and the Creature. Leaving this optional allows for players, who maybe just want to enjoy the gameplay and keep the momentum moving, from becoming encumbered. Also worth noting that these logs are extremely short.

Having these nodes of knowledge as an optional task is somewhat core to Creature In The Well‘s biology. As you progress through the eight dungeons of the game, you’ll uncover optional tasks in certain rooms of the dungeon in the form of puzzles that exist in a room with a door that isn’t locked. Which usually means the puzzle in this room is more difficult and will reward you upon completing it– whether it be a new weapon, a core, or a cosmetic. Not to say that plenty of other games don’t have optional story and gameplay elements, but in Creature In The Well‘s case because both the narrative and level design share these it helps create a cohesive overall experience that feels balanced no matter how deep you choose to indulge. 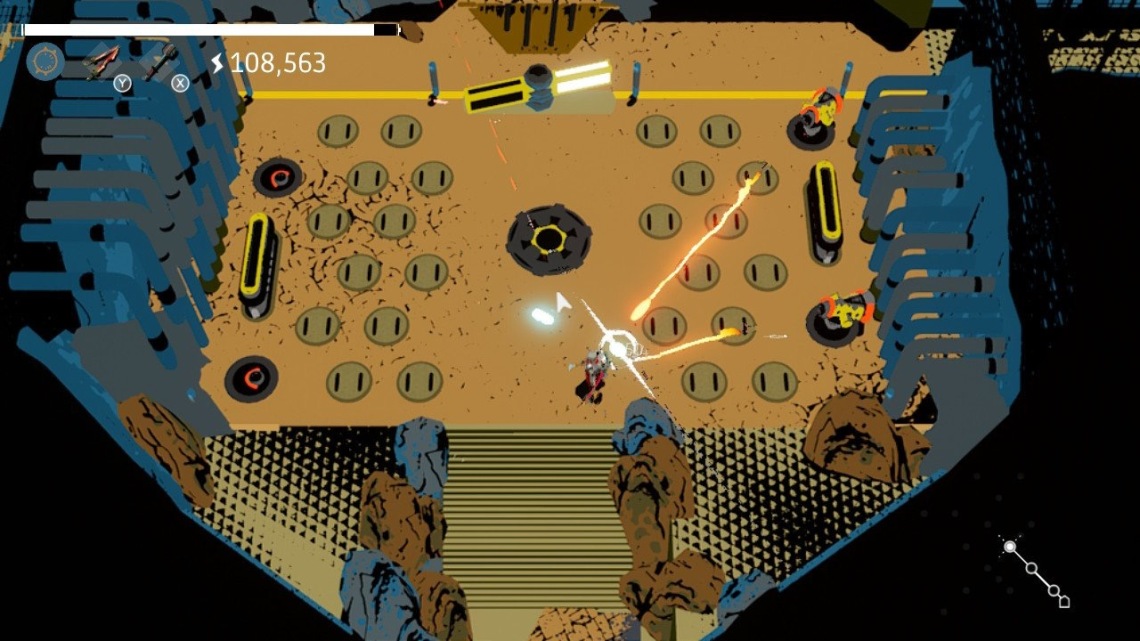 Armed with a charge weapon and a strike weapon, you traverse through rooms of puzzles, enemies, and pins to strike in order to steal their energy which you will ultimately use to power the facility. Each swing satisfied throughout my entire time with Creature In The Well, which was part of what led me down every path scouring each room seeking secret areas or unlockable items. With the variety of items available for you to find, each one has different abilities tied to them that cater to different playstyles. Though, once I found the Dual Blades, I tended not to swap those because using them gave you red line of sight and for me precision wins over power in Creature In The Well.

Just as the combat is something special and unique, the traditional baddies you’d expect to dwell in a cave are non existent. Enemy types aren’t abundant, instead the enemy is the dungeon itself which flows and fits nicely into the world Creature In The Well inhabits. The facility has turrets, energy beams, and energy balls that will attack you and depending on which enemy is attacking, you have to to either strike them with an energy orb or dodge them altogether. The enemies in Creature In The Well give off the vibe of “attacking pinball table” and it works perfectly.

On an overall examination, the level design and boss fights with the Creature seemed fair and balanced. While the progression through dungeons never seemed too difficult– aside from certain puzzles to unlock secrets– the last two dungeons and final boss fight did offer up a challenge that had me feeling accomplished and sweaty upon striking the final blows. I don’t necessarily think that the spike in difficulty towards the end of the game is unbalanced, I do however think that having the proper weapons equipped and playing with patience in your attacks and rolls become much more important during these boss fights than they do in the regular dungeon rooms. So this change in gameplay may catch you off guard upon reaching some of the final boss fights.

Another aspect that Creature In The Well nails, is translating the mood and feeling of the narrative through it’s Hellboy inspired art-style and subtle soundtrack that adds layers to the immersion. With gameplay that can alternate between hectic and graceful, this gorgeous art direction balances between eye catching colors and dreary settings that result in a world that was full of life while still remaining desolate. One of the things that I keep thinking about are the camera angles. In a game where the camera angles are fixed, the way that the camera cinematically sweeps from room to room, throughout hallways, and down stairways kept mesmerizing me. It’s subtle, it’s not grandiose, but it truly was an element that remained present in my mind while playing as well as after sessions with the game. Ultimately, I think this camera work helped with this level of immersion and helped make the game feel more than just a top down adventure.

One of my only gripes with the game was that upon defeat, you must travel all the way back from the village to get to where you left off. It’s not the end all of this game by any means, it just added a layer of aggravation when having to retrace your steps if you weren’t at the boss fight. From a narrative standpoint it makes sense because the creature is throwing you back out to the village, but the act of trekking back from the village to wherever I was in the dungeon became tedious too quickly and sometimes felt like it hindered the flow of an otherwise buttery smooth game.

I struggled to find really any singular game comparison that had a similar flow of combat and puzzle solving with a focus on striking balls to hit pins and enemies. This differentiating factor of gameplay helps Creature In The Well float towards the top when looking at the sea of games released weekly these days. Not only that, but Creature In The Well‘s gameplay is just as fun to play as it is to watch play out. There’s something oddly satisfying about striking a ball and having it react to your weapon and your target with precision and sound effects that elate upon contact. I highly recommend Creature In The Well as something wholly distinctive compared to other games in its genre and worth your precious pennies.

Creature In The Well was developed by Flight School and launches on Nintendo Switch, Xbox One, and PC Friday September 6th for $14.99. Review code provided by publisher.

For all things Creature In The Well and indie game related keep it locked to Pass The Controller. For a deeper dive on all things gaming and nerd culture, listen to the Pass The Controller Podcast with new episodes weekly on your favorite podcast platform. Want to continue the conversation with us and our community? Join our official Discord server.