Usually what makes a good puzzle game is a solid foundation of physics and rules that flow consistently throughout gameplay. Damaged In Transit is a unique puzzler with some inspiration taken from games like Chu Chu Rocket while focusing on a more methodical approach grounded in solving each level through specific patterns of play you must uncover. Does this challenging mind-splitting puzzle game deliver or does it drone on?

The story is light, as the case with most puzzle games. I’m not playing Tetris for the lore. But the inter-world comic book-esque cutscenes are beautifully crafted and an enjoyable bridge between each of the five worlds in Damaged In Transit. Backed with an enjoyable soundtrack, the art style delivers a wonderful world of pixels and tunes that cruise along as you solve the puzzles. 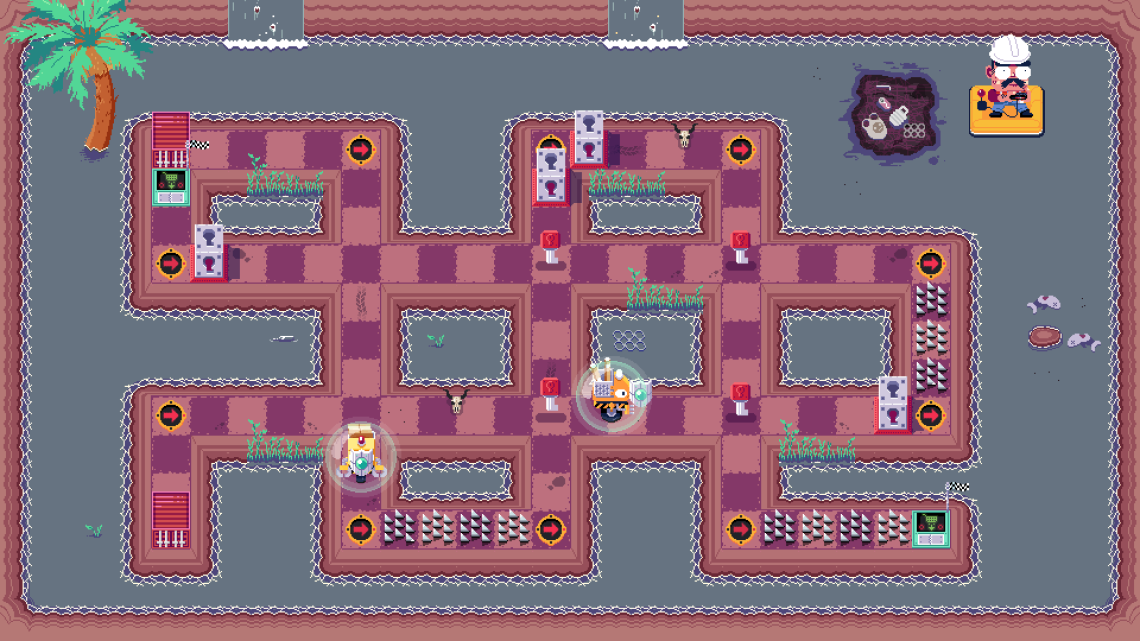 Gameplay is rather easy to grasp, but difficult to master allowing the game design to shine around it. You control the floor arrows that will guide the two automated drones on their way to delivering their packages. While the game introduces new mechanics and hazards through objects that the drones can interact with or be destroyed by. A simple concept that quickly becomes challenging and nerve-wracking, while elation exuding upon completing a level Damaged In Transit is a puzzle game meant to reduce your brain to mush as you split your focus on the two automated drones. This is the hook that makes Damaged In Transit stand out amongst others like it, in that you have to constantly be focusing all of your attention on two different moving objects. It creates a cycle of chaotic nirvana when you finish a level, going from euphoria to taking on the next challenge and finding my palms sweatier than B-Rabbit’s before taking the stage at The Shelter.

To up the ante, and probably make your co-op partner want to stop speaking to you for a night, there’s also a split controller co-op mode that allows you and a friend to play locally together. The twist? You each only control two of the directional inputs for the drones, so the puzzles and levels still function the same, but your relationship may not with the other person after a few levels. I didn’t have the opportunity to play along with someone but I did test it out by playing with a Joy-Con in each hand and noticed no issues with execution. I couldn’t imagine successfully firing on all cylinders with someone in this mode myself, though since Damaged In Transit is already challenging enough for me.

Damaged In Transit can be difficult at times, though there is the option to turn the speed of the game down which is not only wonderful for accessibility, but for people like me who love a good challenge but don’t want to be constantly frustrated, you can choose to adjust the speed at your will with only your score being affected. Though, even with the speed turned down, Damaged In Transit still offers up an exacting experience. I did find myself hitting roadblocks when difficult puzzles arrived, and it would have been nice if there was the ability to skip over levels that were too tough. This causes a fork in the road of thought here though. With the lack of ability to skip over a puzzle, you are forced to keep attempting and get better before you can progress, or give up and throw in the towel. Having each world have a minimum level completion requirement would have been nice so that your progress wouldn’t be ultimately stopped, allowing weaker players to advance and see all that Damaged In Transit has to offer. Though, in the same breath, this game was crafted with the intention of being a balance between difficulty and reward with a leaning towards onerous execution.

Damaged In Transit is a challenging puzzle experience looking to test your reflexes and wit with quick decision making and memorizing patterns in order to guide your drones to the end. With a charming aesthetic and over a hundred puzzles to dive into, there’s tons of content to rush you with an exhilarating sense of accomplishment, as well as enough puzzles to make you want to snap your Joy-Cons off of your Switch. Either way, if you think you’re up for the arduous juggling of two moving pieces in a hectic puzzle, then these are the drones you’re looking for.

For all things Damaged In Transit and indie game related, be sure to keep it locked to Pass The Controller. For a deeper dive on all things gaming and nerd culture, listen to the Pass The Controller Podcast with new episodes weekly on your favorite podcast platform. Want to continue the conversation with us and our community? Join our official Discord server.