Nintendo graced us with a new Nintendo Direct today and the Splatoon 2 finale dropped some never before seen details on the Switch’s big summer release. The intro to the new mode begins with some backstory via a creepy, lost VHS tape, followed by some gameplay, details on new amiibo and their function, as well as a date we can write on our calendars in order to stay fresh.

First thing’s first, the new multiplayer mode, Salmon Run, is a PvE mode which is something the series has yet to have. Salmon Run is a horde mode for you and three Inklings to link up and take on some baddies in hopes of collecting eggs to exchange  for rewards. They didn’t specify what the rewards would be, but regardless if there’s fresh gear or weapon variants, I’m in. Outside of collecting eggs and returning them to a designated spot, the mode seems pretty straightforward. You and three friends or strangers online are working together defeating waves of fish-type enemies. Another little detail about the mode was that “downed” Inklings can deploy a lifesaver float and teammates can spray their ink on the float to revive them.

An interesting gameplay focus I noticed here is that in Splatoon‘s typical PvP multiplayer modes, the object is usually heavily focused on covering areas with your color ink to win or completing an objective, with splatting your enemies is more of a secondary objective. While in Salmon Run, it seems as though the ink you spray will be focused on taking out enemies and the ink you cover the ground and objects with will be for mobility purposes. It all makes sense and it’ll be exciting to take the Splatoon mechanics and apply them to this type of game mode. 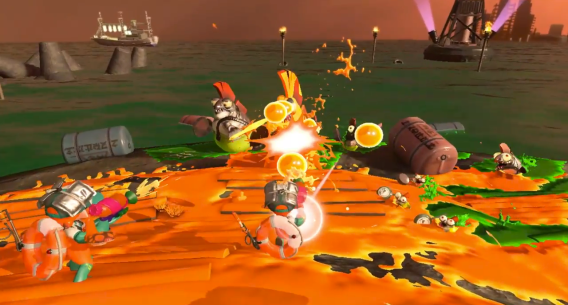 My hope here is that you will be able to link up with friends and use matchmaking to round out your party if you don’t have a group of four. Nintendo is still being pretty tight-lipped about the Switch’s online network as a whole so it’s tough to say what we will be getting when Splatoon 2 finally launches.

It’s nice to see some signs of game modes outside of what the original had to offer. Don’t get me wrong, the original Splatoon‘s multiplayer was addictive and exhilarating but outside of that they had an enjoyable, but short single player with nothing else to offer. Not to mention, communication is going to be key in this mode, so here’s hoping that Nintendo offers hassle-free voice chat. The original’s lack of native voice-chat it definitely what hindered the longevity of the game for me. I mean, I’m still playing Overwatch and there’s no single-player there, but there’s a community that I can engage with and interact with without having to go through third-party apps or using other devices. Splatoon definitely has the gameplay down, Nintendo just needs to deliver the infrastructure to stabilize the community.

Fans of amiibo will be as cheerful as an inkling at a Calli and Marie concert to know that three new Splatoon 2 amiibo will be launching alongside the game this summer. New versions of Inkling Girl, Inkling Boy, and Squid will be available day one.

Some of the features they shared about what the amiibo will do in Splatoon 2 were outlined in the direct. You will be able to save your custom load-outs to your amiibo figures presumably making it easier to bring your preferred setup to a friend’s house. There was also mention of the amiibo sometimes giving you special gear. It was unclear if this will function similarly to how the amiibo worked in the original game, where you completed trials in order to unlock gear, or if they are just going to randomly gift you goodies. There was also an emphasis on taking in-game photos with your amiibo/Inkling and sharing them directly to social media.

My guess is that we will get at least one more Splatoon-centric Nintendo Direct leading up to the launch detailing more modes and features that we will see in the sequel. Splatoon 2 and the three amiibo will launch exclusively on the Nintendo Switch July 21, 2017. Until then, stay fresh!